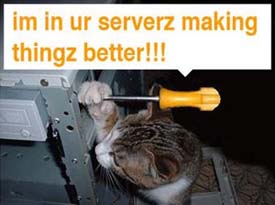 Funny enough, I guess I have to blame Nano’s super-slow web servers for getting an extra burst of writing done last night.

Was feeling tired and unwriterly, and decided I’d close up the ol’ Word doc for the night and start fresh in the morning. Tried to log onto the site to update the word count, but of course the site was down. (Who wants to bet that at this time next week, the site will be blazing fast and smooth sailing?) A maintenance notice indicated that the site would only be down for about thirty minutes, I figured I would wait till it was back up and kept the Word doc open to kill the time, which forced out an additional few hundred words in the hour it was down. Go technical difficulties!

I don’t think I’m going to get any work done once the voting starts closing on the East Coast and the numbers start rolling in — it’ll creep along a a painfully slow crawl for the rest of the night, but I’m gonna be hooked to every damn minute of it. (Right now, the election coverage is mind-numbingly idiotic. They have nothing to say yet, so they’re saying it LOUD and REPEATEDLY in the hopes that you won’t notice how lame their coverage is.) So will try to get a teeny bit of writing done today, although maybe it’s too much to hope that my brain will be able to focus at all. On anything other than the election, that is.